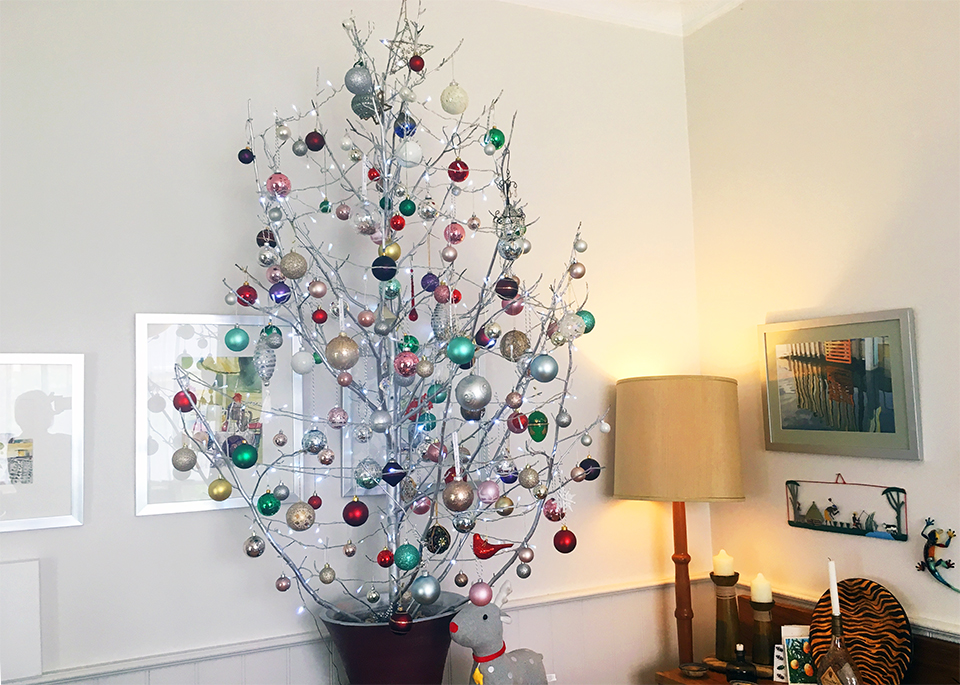 My daughter and I stood before this Christmas tree creation when it was done, watching it glitter with the reflected fairy lights, and thought it beautiful.

Two years previously, a deciduous tree had died in our garden.  As we took it down, I saw that the two top branches tied together made an almost perfect Christmas tree shape. That year we painted it gold and hung our existing Christmas tree decorations on it.

For weeks, we’d leap up in the evening to move a ball to a better position, critiquing it like it was a work of art.  It was totally addictive.

This year we painted it chrome, and between us bought the better part of a container-load of pink and mint coloured balls, and a few more ‘showstoppers’ for good measure.

Our 2.5 year old grandson surveyed it and proclaimed he did not ‘actually’ like Christmas at all.

Our 3.5 year old grand-daughter caught in her current Frozen addiction, wearing her Elsa crown, Elsa dress and Elsa braid, was only interested in the blue baubles, because Elsa wears blue.

She was appeased when I pointed out that the glittering reflections in all the balls looked like snowflakes.  But as none of them had Elsa painted on them, her interest waned soon enough.

My daughter and I continue to hum and haw over the placement of the balls, but not with quite the same addiction as last year.  We have already started to plan next year’s extravaganza, flouro pink and silver.

I agree. Not much of this has to do with the reason we celebrate Christmas. But it tells a story none the less.

This year, I had the great pleasure of being involved in a four month cultural intelligence program in partnership with Mahana Culture and the Department of Health and Human Services.

My role was to help the participants learn to ‘talk’ their cultural tales so they could more readily connect with their clients. From many different cultures, overwhelmingly, they wanted to know who these people were before they might trust and engage with them.

To start, the people in the room, mostly of Australian background, were a little skeptical.  We’re Ozzie’s, what’s there to know about our culture?  We throw prawns on the barbie at Christmas, wear thongs and love sport.  Or, we have Italian, Asian, or British ancestors.

As the program unfolded, what became evident was their gratitude in being given permission to explore their cultural background and tale, and then that mostly it’s an aggregation of the smaller things, the small tales that make us who we are.  And sometimes it’s the tragedies, the loss and the grief.

We heard about a brother, who previously undefeated at snooker, was beaten by an old codger with only one arm in a small country town.  By the end of this tale, we were there in the pub with him.

We heard about the silly things parents did, guinea pigs, children’s sleep overs, and folk dancing.

We heard too about a child lost, and a dreadful civil war.

We all left more aware of the importance of owning our tales and understanding our identity if we are to connect more deeply to one another.

So my daughter and I look again at our Christmas tree and what do we see?  A great deal.

It rather perfectly describes the two of us in its creation and in our future projections of what it can be.  It describes family ritual a little out of whack with the traditions, but still paying homage to the spirit of Christmas.

It describes a family set adrift over three decades ago making their own culture as they go.  Like so many.

I hope you’ll gather your tales around you in the coming years and wear them proudly.

Wishing you great joy this Christmas and a 2018 full of great story.

If you would like to learn the art of story telling and why your stories matter, have a look at the workshop details listed here.